Janis Wilson is a writer, retired trial lawyer, television commentator and lecturer. As a kid, she was inspired by Rosalind Russell, who played reporter Hildy Johnson in His Girl Friday. Janis loved the idea of digging up news about corrupt officials and putting it on the front page. Consequently, she attended the University of Memphis, graduating with a degree in journalism. As a reporter, she wrote award-winning articles about the failure of local governments to address inner city problems, life in a women’s prison and the challenges of providing quality education. She returned to the University of Memphis and obtained a Master of Arts in Political Science. Hoping to combine her love of journalism and politics, Janis moved to Pennsylvania’s capital, Harrisburg, and resumed her newspaper career. In Harrisburg, her reporting included articles on the murder of school teacher Susan Reinert and on police corruption.

Janis spent countless hours in state and federal courts, covering trials and grand jury proceedings while investigating local government. In court, Janis observed the best and worst trial lawyers. One lawyer was so bad she decided, “If he could get through from law school, so can I.” And she was right; she graduated from the Temple University School of Law and went on to try cases in Philadelphia and the surrounding counties. As a member of the Pennsylvania Bar Association, she chaired the Civil Litigation Section and edited its quarterly magazine, Update. She also served on the Legal Ethics and Professional Responsibility and the Women in the Profession Committees. Janis has taught continuing legal education courses on trial strategy, effective brief writing and professional liability. She even portrayed Mary Surratt in the mock appeal of Surratt’s death sentence before an appeals court and performed the role of defense attorney in a recreation of the Lindberg kidnapping trial. Her cross-examination and closing argument led the mock jury to acquit Bruno Richard Hauptmann.

Her first short story, The Devil’s Triangle, appears in Death Knell V, available on Amazon. Janis is a commentator for various true crime programs, including Nightmare Next Door, Deadly Affairs and Scorned, all of which appear on the Investigation Discovery (ID) network. She has also appeared on the Oxygen network’s program, Snapped: Killer Couples. An Anglophile, she has been an avid fan of British mysteries, in print, on television and the big screen. 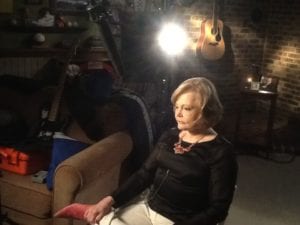 For story background and writing research, she often visits England and never fails to stop at a posh hotel for afternoon tea. Since childhood, Janis has been interested in the crimes of Jack the Ripper. That interest solidified on her first escorted tour of the Ripper’s killing sites in Whitechapel. So fascinated was she by the killer’s ability to escape capture, she participated in the Jack the Ripper Conference commemorating the 125th anniversary of the Autumn of Terror. She has continued exploring those Whitechapel streets, unescorted, on her many trips to London. After visiting those sites and attending numerous lectures, Janis read dozens of books on the Ripper case and now has written one of her own, Goulston Street: The Quest for Jack the Ripper. As the co-organizer of RipperCon, the American Jack the Ripper conference, Janis moderated a panel on The Truth about Ripper Fiction, and gave a lecture on Sherlock Holmes and his creator, Arthur Conan Doyle. Holmes’ influence is still felt throughout the Ripper community.

For inspiration, she has studied the best authors of all time. For pure style and grace, she is drawn to Jane Austen. For fabulous plotting, she opens any book by Wilkie Collins. To see how great characters are shaped and evocative descriptions written, she notes there is none better than Charles Dickens. The contemporary writer she can’t praise enough is non-fiction author Kate Summerscale. Janis is a member of Mystery Writers of America, Sisters in Crime, the Maryland Writers Association, the Sherlockians of Baltimore and The Wodehouse Society. She lives without incident with her husband and two rescue cats, Jade and Amber. Jade sits atop Janis’ chair while she writes. Janis is grateful to her muse.

Order Goulston Street: The Quest for Jack the Ripper

See through the eyes of Lady Sarah, a Victorian era aristocrat, as the infamous murderer Jack the Ripper terrorized the Whitechapel in London in 1888. The book is available to purchase from Amazon.com & Barnes and Noble